In a blog post a mere 24 hours before one of the most important votes in British history, Bing unveils that it is beta testing its Bing Predicts model, a service that uses search, social signals and other data to forecast the outcomes of events, to in their words “leverage our algorithms against web/social data in the U.K. and Scotland to bring projections and forecasts ahead of the historic Scottish independence vote on September 18” that will decide whether Scotland remains a part of the U.K. or heads off on its own as an independent state. Think of Bing Predicts almost like a digital Nostradamus.

Interesting enough, there are multiple reports out that the Bing Predicts results can be seen by searching for phrases like “Scottish independence,” as well as “Scottish referendum.” So much for keeping the cat in the bag but that is to be expected in today”s digital world.

So what were the results you ask?  Drum roll please………

Bing Predicts results for the Scottish independence vote are: 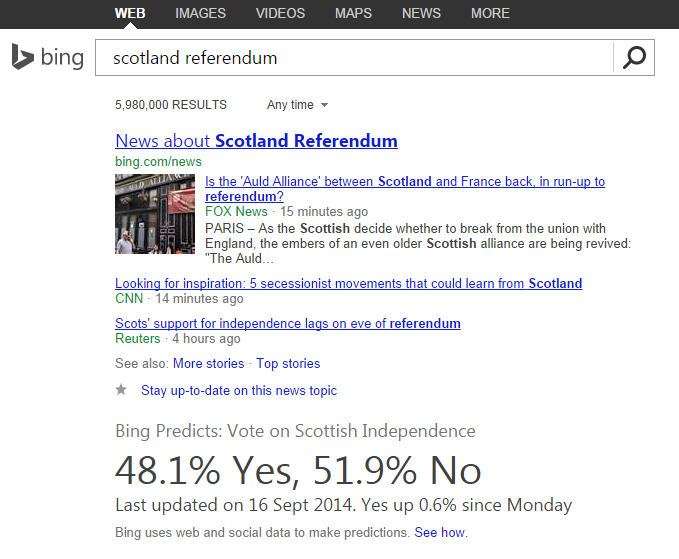 Well, if Bing Predicts is right, the Scots might be singing Rule Britannia a few more years or as the Marx Brothers would say, “Close but no cigar.” Bing Predicts is an interesting model and one that has already been used to provide predictions for NFL games and World Cup matches. I wonder if it can predict who will be killed off this season on The Walking Dead…but i digress.

Now, with all this technology and advancement in predictive modeling you can put off heading to your local bookie”s office to place some bets. These “predictions” all come with a degree of accuracy and some events are easier to predict then others. Political elections, for example, are not as easy as reality TV shows or as tough and complicated as sporting events. Why are some events easier to predict than others? Well people are more likely to freely share their true opinion on their favorite Big Brother personality or American Idol star than they are on their political view in a public forum like Twitter or Facebook and eligible voters don”t exactly overlap perfectly with web users.

In a case like the Scottish Referendum there is no historical precedence that we can use to model it off of, which brings additional challenges to data analysis.

So how did Bing come up with the prediction for the Scottish Referendum? For the prediction, Bing Predicts started by looking at the trends and sentiment based on web data and social signals, and then they adjust for various biases and try to understand the true opinion expressed by a given population most representing the actual voters themselves. In this case, I”d be interested to see what population matched against the Scots. Algorithmically, Bing Predicts is able to detect terms that are pro-independence and pro-UK/pro-union then compare the total aggregate sentiment of one against the other to finally arrive at a prediction for whether the referendum will end up with a ‘yes” or ‘no” vote.”

Now what I think is extremely interesting is that beyond its overall prediction on the vote, Bing was also able to look at search queries coming from Scotland in the past 6 months. These queries clearly identify trends and patterns coming from Scotland showing the top concerns of the people of Scotland concerning the referendum which include: currency, geo-politics, identity, banks, oil, the BBC, golf and law firms. Here you can see the power that Bing Predicts can have potentially. Imagine this tool in the hands of a politician or advocacy group. Knowing the concerns of the people in real time, they are able to customize their pitch to address these exact concerns. For example, if the pro-independence groups saw this data they could address the concerns of the populations about how Scottish independence can effect currency, political relations and oil issues and vice versa for the pro-union groups. From a web marketing standpoint, it is equally huge as marketers will be able to see the exact outcomes of web design changes without implementing the changes beforehand, or study the effects of an email, PPC or social media campaign. The possibilities are endless. While Google may dominate search, Bing just might hold the reins of the future-literally.