Monkey see, Monkey do. Nothing can probably be better said that that in regards to Bing Ad’s announcement on August 25 that it will test the inclusion of close variant keywords in exact match in the U.S. search market for a portion of search queries. Sound familiar doesn’t it? With Google launching close variants in its Adwords, it was onyl a matter of time before Bing Ads played catch-up. Now I will admit that I sometimes gives Bing flak for its paid search platform not being the most user-friendly especially compared to Google Adwords but usability is one thing, results is another and I can say that I have seen some good results on Bing search marketing campaigns and in all honestly, sometimes at a better ROI than Google. I am happy to see that they are going to be testing close variants as part of exact match. Perhaps they will learn from some of the mistakes Google has made in launching theirs that they can make their release even better in addressing the apprehension of the search marketing world to the inclusion of close variant keywords.

So what does close variant mean to Bing? Bing says exact match will include “minor grammatical variations,” such as plurals, abbreviations, acronyms, spacing, and misspellings.Once again, very similar to Google’s definition so no surprise there. The Bing Ads close variants test will also be subject to “extremely high relevancy thresholds,” and close variants will be mined from a number of “highly qualified sources. This comes directly from Bing. This gives me the hopes that I mentioned before. As mentioned in another article on MarketingModo, many are concerned about Google’s close variants because we won’t be able to opt-out of them and there are worries about picking up irrelevant keywords which will shoot up costs and dramatically lower ROI. It will be interesting to see if Bing lives up to its word about high-relevancy, as this would do a lot to soothe the fears of many search marketers in regards to close variant keywords.

“Ultimately, this feature will be designed to match your ad to queries that represent exactly the same intent to those you are already using,” writes Microsoft group program manager Matt Bisson. “The close variants feature does the work to optimize for you, ensuring that your ad shows when the query varies only slightly from the keywords you have already selected.”

Bing says it expects this test to cover the close variant types below: 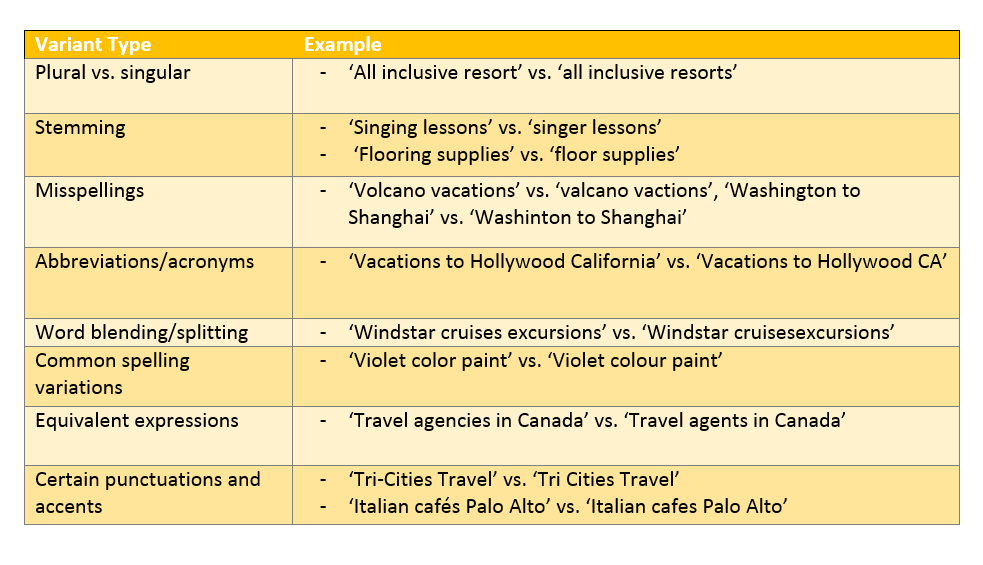 According to WordStream chief technology officer Larry Kim, keyword match type consolidation is one more step toward a “keywordless search” future and he expects to see more updates like this in the near future. He continued on by saying “Keywords have served us well for the last 15 years as a proxy for commercial intent.” “They’re definitely still important, but are relatively less so if you consider product updates like Hummingbird, which can infer intent of ambiguous searches, as well as AdWords Express and Google Shopping, which trigger ads without even requiring advertisers to specify keywords.” In addition, Kim notes search engine ad platforms are phasing out older ways of optimizing PPC campaigns that involved cloning the account structure like device targeting and now phrase and exact match. “By eliminating those features, they’re forcing us to shift the focus away from these low-level operations,” Kim notes. “Going forward, ROI will be found by investing in more strategic elements of paid search advertising, like ad copy and landing page optimization as well as negative keyword research. I think they’re making the changes to make PPC campaign management less confusing for new advertisers, which is where much of their future growth will come from.”

What Kim is saying is that we can expect the paid search world to fundamentally change very shortly and these close variant inclusions are just the first steps into a keywordless, intent driven search marketing focused on ad copy and landing page optimization. Once again relevancy is king. Stand by for future articles on the direction the search marketing world is going and how you can use it to improve you own search marketing efforts!