Most marketers know the importance of having a presence on Google+. It is Google after all and Google themselves said that there may be SEO advantages to using the social network. Since April Google gave marketers another reason to head to the platform. Following Facebook’s example, Google+ launched +posts. The Google+ equilvilant of Facebook ads. However, there is a catch. The +Post ads are available to any brand with a Google+ Page with at least 1000 followers. The reason to limit the availability to just those accounts with 1,000+ followers was to ensure that advertisers were getting the most value out of their spend. Pages with 1,000 or more followers tend to have an actively engaged audience and consistently create high quality content. Herein lies the problem many businesses now find themselves. What if your brand is new to the Google+ game and you lack the 1,000 followers? That is an enormous number for some small companies but have no fear, MarketingModo is here with 4 tips on expanding your base to 1,000 and beyond! First and foremost…

Do Not Buy Them

Resist the urge to open up your pocketbook and buy followers. Yes, it is only 1,000 followers. Why not go the quick and painless route and pay for followers? It is an option that has crossed the minds of all marketers at some point. When you are sitting at 100 followers and barely creeping along, what are you to do? Just remember, at the end of the day what will you have gained by buying these followers than earning them? If you buy the what you need to get to 1,000 followers, you will hit your number but you also just polluted the core of your Google+ foundation. Bots don’t make good followers. If you buy yourself a bunch of bots, you likely won’t get much in the way of comments, +1’s, and shares or any engagement at all, and miss out on potential SEO opportunities. Remember, SEO loves user generated content and that is kind of hard to do with a bunch of bots. Do you really think you will outsmart Google? You should know by now that Google knows all. Since they seek to validate and score the quality of everything else you do on the web, why wouldn’t they also evaluate the quality of your following? As nice as it would be to just get the number and move on with +Post ads and your life, don’t give in to the urge to buy the numbers you need. You’ll miss out on many good benefits of getting followed by 1,000 real people will do. 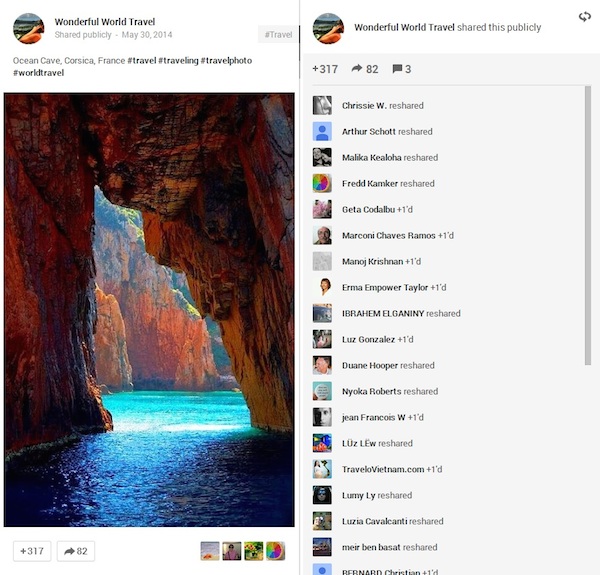 Similar to Twitter, Google+ makes very little distinction between a business entity and a person on the network. It its mind, there is not much difference in how they should behavior. Businesses should be engaging others the same way that a person does. This means that, unlike Facebook, a brand is free to follow any other Google+ user and begin interacting with the content they are publicly sharing on the network. See? little distinction between whether it is Tom Ford or MarketingModo itself. Also, every follower counts, whether it’s another brand or a person. Twitter acts the same way. Now how to find people. Yes, this is easier said then done but all good things are. There are many ways to find the right people to start following.

Use one or all of these tactics as I highly recommend. As you go through this process, don’t forget to engage with the new content you’re placing in your home feed. Nothing encourages a follow back like a +1, comment, or share of the shiny new content produced by the people you’re hoping will follow back and get you to 1,000.

One of the greatest organic differences between Google+ and the rest the degree of segmentation allowed. Thanks to circle,s we can organically target the right content to the right pockets of followers and not overload the rest of our fans with content they might not want or care about. In the case of one MarketingModo client, a printing company, you can target those in your wedding invitation circle with great wedding related content while making sure your business card folks aren’t scratching their heads in confusion. The rest of the social networks make us pay for that segmentation while Google+ gives it to us for free and we like free. One thing that you absolutely don’t want to do is just click “follow” over and over, and set yourself up for a segmentation migraine later. Instead, try to place new people into a reasonable circle from the beginning. Yes it is some extra work up front but it is very much worth it believe me.

At the end of the process to get to 1,000+ followers on Google+, you want to be certain that the audience value was worth the effort. Similar to what was said earlier about not buying followers and getting a bunch of bots in result, also don’t follow everything that shows up as a follower.All followers are certainly not equal. If you aren’t likely to follow an account that still has the generic Twitter egg or Facebook silhouette for a profile picture, you shouldn’t follow an account that still has the generic G+ silhouette. Those people just aren’t making the effort to have an active social media program and probably won’t make engaging fans. Users that have taken the time to add a photo of themselves and a little biographical information are more likely to be users that actively engage on Google+. These are the folks that you want!

You’re going to use every bit of your social media and community management savvy to crank up your Google+ following to 1,000 and beyond but it will be well worth the effort. Google+ is a place where people really like to comment on and share the cool stuff they find there. There’s no algorithm dictating who will see your content and no limits on post length. So, create and find great content to share and enjoy the rewards of making new friends.